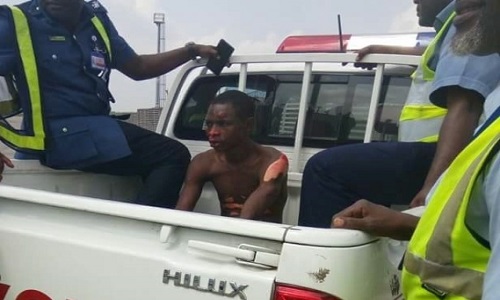 The Federal Airport Authority of Nigeria, FAAN, on Wednesday doused tension over speculations that a suspected terrorist invaded the tarmac of the Murtala Muhammed International Airport, Lagos.

Some air travelers earlier today reported seeing a man trying to latch on to a taxing aircraft on the tarmac of the airport, expressing fears that he might have been a terrorist.

Several witnesses also confirmed seeing the man get knocked down by strong wind from the aircraft’s engine and later fleeing from the tarmac with some bodily injuries.

Explaining what happened at the airport in a statement, the General Manager, Corporate Affairs of FAAN, Yakubu Datti, said the man, identified as Mr. Alabibu Olushola, was a stowaway, and not a suspected terrorist.

According to Mr. Datti, vigilant aviation security staff of FAAN apprehended Mr. Olushola, who was attempting to stow away in a taxing aircraft on the tarmac of the MMIA

He said the culprit was arrested as soon as he scaled the perimeter fence near the moving aircraft and after interrogation by the aviation security staff, he was immediately handed over to the police for further interrogation.

“The Authority wishes to remind members of the public that access to restricted areas of the airport, including the tarmac and perimeter roads, is prohibited for unauthorized people, including airport staff, who have no business being there. This is more so in view of the present security situation in the country.

“The Authority will henceforth not hesitate to arrest and prosecute any person, including unauthorized airport staff, who is found loitering around restricted areas of all our airports”, the statement read.