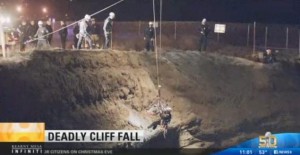 A man who was paying too much attention to his electronic device accidentally walked off the edge of a cliff in San Diego and fell 60 feet to his death, according to lifeguards. The fall happened around 4:50 p.m. on Friday near Sunset Cliffs Blvd. The details of what he was doing aren’t known yet and lifeguards still aren’t sure whether the 30-something was using a camera or a phone.

“Witnesses stated seeing someone distracted by an electronic device and he just fell over the edge,” San Diego lifeguard Bill Bender told KNSD-TV. The man “wasn’t watching where he was walking, he was looking down at the device in his hands.” After the fall, three people who were in the area made their way down the cliff to give CPR.

“They acted quickly, they found a way to get down the cliff,” Bender said. “They put themselves at jeopardy … They administered CPR to the person in attempt to save a life.”