Home National News Odd News Man Plots To Bomb Hospitals, Ends Up In One After Blowing Himself...
Facebook
Twitter
WhatsApp 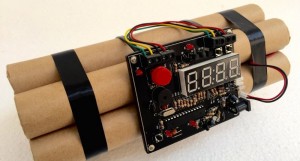 A South Dakota man planning to blow up Veterans Affairs hospitals was arrested after he accidentally detonated his home-made bombs on himself, the Grand Forks Herald reports. Martin Rezac, 59, was indicted Friday on felony charges of possession of explosives with criminal intent, relating to the explosion at his home, which sent him to the hospital on Thanksgiving with multiple cuts and abrasions, and possibly some missing fingers, according to court documents reviewed by the Herald.

That day, authorities question Rezac’s friend, Allen Kayl, who was incarcerated. Kayl told them Rezac was planning an attack on the hospitals because VA staffers were “pissing him off.” Kayl also told investigators”there was a possibility he would in fact do it.” Investigators found extensive bomb-making materials, including a bomb made from a peanut butter jar and a PVC pipe bomb. There were also numerous explosive chemicals, including sodium nitrate, hydrogen peroxide, baking soda, isopropyl alcohol and sea salt.

Other items found included “modified colander, scales, an epoxy kit, a digital thermometer, a glass bottle labeled “flash” and a legal notepad with handwritten notes and directions to make a homemade explosive called hexamethylene triperoxide diamine,” according to the paper. If convicted, Rezac faces prison time and tens of thousands of dollars in fines.