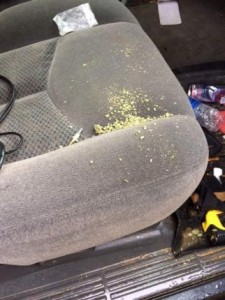 Authorities in Virginia said a man busted for marijuana possession had called 911 “in a disoriented state” and requested delivery of rolling papers. The Waynesboro Police Department said Kyle Dustin Head, 24, of Waynesboro, is believed to have been under the influence of marijuana early Thursday when he called 911 and asked a dispatcher to bring him rolling papers.

Two officers were dispatched to Head’s location and he was found sitting in a parked 2005 Chevrolet pick-up truck. The officers detected the odor of marijuana and “noticed the green leafy substance on Head’s clothing, the dash board of his truck, the passenger seat and in his right ear.”

Police did speculate as to how marijuana ended up in the suspect’s ear, but the situation led them to announce a “pot head named Head has pot on head” in a news release. Head allegedly told officers he had thought he was calling a friend when he asked the 911 dispatcher to bring him papers. Head was cited for misdemeanor marijuana possession.

Share
Facebook
Twitter
WhatsApp
Previous articlePressed Toddler Interrupts Parents’ Wedding With ‘I Have To Poo!’ Announcement
Next articleMan Rescued After Jumping Into Tiger Enclosure At Zoo In China
- Advertisement -