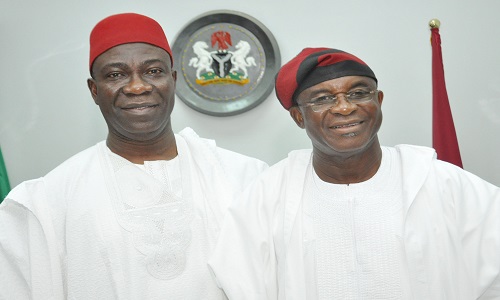 The immediate past President of the Senate, David Mark, has assured that Benue South Senatorial zone will remain fortress against the opposition All Progressive Congress, APC, in the forthcoming re-run election.

The former Senate president based his conviction on the overwhelming solidarity and support “by my people who are solidly behind me. I can tell you without any fear of contradiction that there is no opposition to my party, the Peoples Democratic Party (PDP) in my zone”.

Mr. Mark assured the Senate caucus of the PDP, who paid him a solidarity visit following the annulment of his March 28, 2015 Senatorial election, that the Appeal tribunal verdict has strengthened his and his constituents resolve the more.

“The Appellate tribunal judgment came as a surprise to me. But I am happy there is opportunity for a rerun election. I can assure you that any day, any time, my people will vote for me.

“Benue South Senatorial zone is totally a PDP area. One Senator, the four House of Representative members, 10 out of 11 state House of Assembly members are all members of the PDP. So, clearly, there is no room for APC or any other party in my area.

“Be rest assured that under a free and fair contest, I have no challenger. My people would not be cowed or intimidated to do otherwise.

“I respect the ruling of the Appeal Tribunal, but let no one be deceived by any gimmick that the result of the election was declared while collation was still on. The Independent National Electoral Commission (INEC) returning officer Professor Latif Tiamiyu who announced the result three days after the election, a university Professor is alive.

“The election was conducted on March 28, 2015, the result was declared on March 30, 2015, how could the result have been declared before the final collation?

“For me, it is one of those ironies of life. I take it in good faith. I know as a matter of fact that my people will rise up to the challenge to vote for me and defend their votes”, Mr. Mark said.

Earlier, the Deputy President of the Senate Senator Ike Ekweremadu, who led the 49 PDP Senators to the solidarity visit, said the appeal tribunal verdict is only a temporary setback but expressed confidence that Senator Mark will bounce back at the rerun polls.

Mr. Ekweremadu said: “We are here to assure you our leader that we will stand by you. We know your worth. Nobody can diminish the fact that you remain a great asset to this country. We know your people value you. They will not let you down.

“We will be with you in this struggle. You are not new to this kind of battle. Like in the previous challenges, you will come out Victorious because you mean well for your people and this country”.