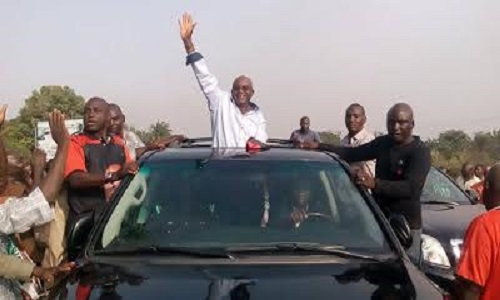 Immediate past Senate President, David Mark, Chairman of the Peoples Democratic Party (PDP) in Benue state, Dr. Emmanuel Agbor, ex-Minister of Interior, Abba Moro and scores of political leaders in the state yesterday urged the people of Benue South Senatorial District to see the forthcoming rerun election as a necessary challenge to emancipate the Idoma nation from oppression.

The PDP stakeholders spoke in Otukpo, Benue State, when the former Senate president was hosted to a warm reception by his supporters following the annulment of his election by the Court of Appeal sitting in Makurdi, on November 28, 2015.

Senator Mark was coming home for the first time since the court nullified his election.

Addressing the crowd of supporters that thronged his Otukpo country home, the PDP leaders expressed reservations about the Appeal Court verdict but expressed confidence that another opportunity is in the offing with the forthcoming rerun to prove that Sen. Mark won the March 28, 2015 election “clean and clear”.

“See this forthcoming rerun polls as challenge for our emancipation. We must not allow external forces to dictate our political destiny.

“We won the election clearly. We will win again. These are trying times, but history will judge because the mandate of the people cannot be compromised under any circumstances”.