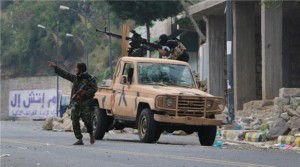 A mass prisoner exchange is under way between Houthi fighters and government forces in Yemen amid UN-sponsored talks to end the fighting in the Arabian Peninsula country. Expectations for a deal at the peace talks in Switzerland are low as both sides seem to be failing to honour a week-long ceasefire.

“We think that this is the only option for us to go down the path of peace and achieve peaceful resolution to the conflict in Yemen,” he said. Al Jazeera’s Zeina Khodr, reporting from the talks venue near the Swiss city of Biel, said the prisoner swap was “undoubtedly a positive development” in the civil war, which has killed almost 6,000 people and led to a humanitarian disaster in Yemen.

around the city of Taiz in central Yemen. The swap was taking place a day after the truce came into force to halt fighting in nine months of civil war between the Iran-allied Houthis, based in Yemen’s north, and Arab coalition-backed fighters loyal to President Abd-Rabbu Mansour Hadi.