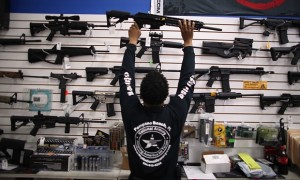 Behind closed doors, speaking with investors and Wall Street analysts, the gun industry views mass shootings as an opportunity to make lots of money. Ordinary people are despairing about the frequency of tragic events like the murderous rampage in San Bernardino on Wednesday, or the Planned Parenthood massacre last week. And the cycle of mass killing, media frenzy, and political stalemate starts anew each time.

But meanwhile, gun sales continue to break records, a fact that has not gone ignored by financial analysts. The Intercept reviewed investor transcripts for gun companies, ammunition manufacturers, and sporting stores, and found many instances of industry executives discussing mass shooting incidents and the resulting political dynamics as lucrative.

Here’s how it works. Following a mass shooting, there is talk of gun control, which the National Rifle Association and other gun advocates attack as an assault on the Second Amendment. Notably, gun and ammunition manufacturers often donate, either directly or as a portion of each sale, to the NRA. The fear of losing gun rights leads to panic buying, which brings greater profits to gun retailers, gun companies and their investors.

“The gun business was very much accelerated based on what happened after the election and then the tragedy that happened at Sandy Hook,” Ed Stack, the chief executive of Dick’s Sporting Goods, a leading gun and ammunition retailer, said in September 2014 at the Goldman Sachs Global Retailing Conference. Stack noted that the industry saw “panic buying” when customers “thought there were going to be some very meaningful changes in our gun” laws. The new sales “didn’t bring hunters in” but rather “brought shooters into the industry,” he added.