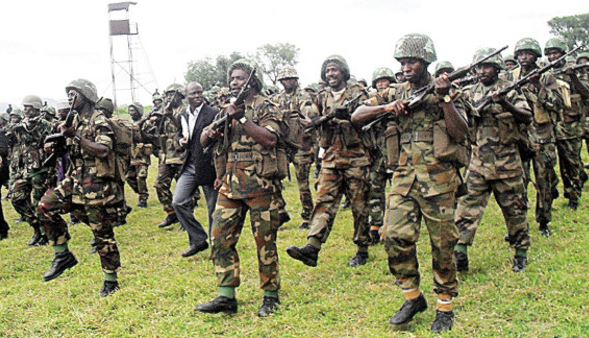 This evening (yesterday), troops of Operation Lafiya Dole, intercepted and destroyed 10 suspected Boko Haram terrorists suicide bombers at the outskirts of Maiduguri city. Contrary to earlier media reports and rumours flying around, 2 Boko Haram terrorists suspected suicide bombers earlier intercepted by vigilant troops disclosed their colleagues intent to enter the city with the aim of detonating bombs in selected public places.
Consequently, the troops laid ambush on the terrorists suspected routes along Damboa road and eliminated them. The suicide bombers were intercepted in 3 different locations approaching the city; Ajiri area towards Damboa road, High Court axis and the Eye Hospital Area. The Explosive Ordinance Device team have been mobilized and they are combing the general a area as well as clearing the debris. Normalcy has been restored to the general area and the public are please advised to go about their normal businesses and social activities. However, it is important to maintain more vigilance and security consciousness. Please kindly disseminate this information to the public through your medium. Thank you for your kind cooperation.