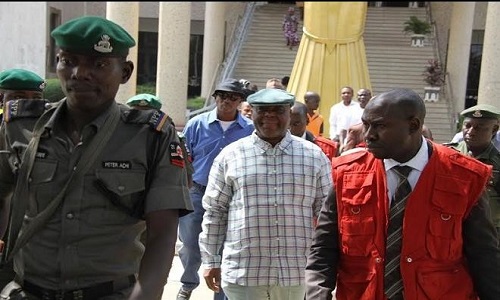 The embattled founder of Daar Communications Plc, Chief Raymond Dokpesi might not be let off the hook anytime soon as the Federal Government is investigating his alleged connection with another fraud involving about N8billion, counsel to the Economic and Financial Crimes Commission, EFCC, Rotimi Jacobs (SAN) told a Federal High Court in Abuja Thursday.

According to Mr. Jacobs, the Federal Government is about concluding investigations into fresh allegations of N8.4billion Mr. Dokpesi collected from the Goodluck Jonathan administration for airing the FIFA U-17 world championship, which Nigeria hosted in Jan 27, 2012.

He stated that even though the broadcast right was granted Daar communications by FIFA and without the Federal Government as a party to the contract, Mr. Dokpesi allegedly collected N8b from the Nigerian government for his execution of the contract.

Jacobs made the disclosure while arguing the Federal Government’s counter-affidavit against Dokpesi’s bail application.

Dokpesi and his company, Daar Investment and Holding Company Limited, were arraigned by the EFCC on Wednesday on a 6-count charge. He was accused of unlawfully receiving N2.1billion from former National Security Adviser (NSA), Sambo Dasuki.

The media mogul pleaded not guilty to the charges and applied for bail.

Jacobs, while urging the court to reject Dokpesi’s application, argued that granting Dokpesi’s bail application will prejudice investigation into the N8b deal.

Ozekhome urged the judge, Justice Gabriel Kolawole, not to deny his client bail based on the prosecution’s speculation of fresh allegations.

Justice Kolawole adjourned delivering judgment on the bail application to Monday, December 14 to enable him study the matter properly.