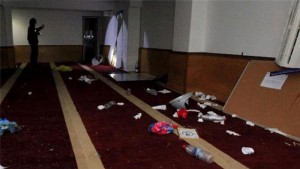 A crowd vandalised a Muslim prayer hall and set fire to copies of the Quran on the French island of Corsica, police said, in an attack condemned by the government. The violence came on Friday amid heightened security measures for the Christmas holiday, and nationwide fears after the November 13 attacks in Paris killed 130 people.

French Prime Minister Manuel Valls wrote on Twitter that the break-in in the city of Ajaccio was “an unacceptable desecration”.  Tensions had mounted in Ajaccio Friday after two firefighters and a police officer were injured overnight in a low-income neighbourhood of the city when they were “ambushed” by “several hooded youths”, authorities said.

On Friday afternoon around 150 people had gathered in front of the prefecture in a show of support for the police and firefighters, officials said in a statement. But some in that crowd broke away and headed for the low-income housing estate where the violence took place the night before.