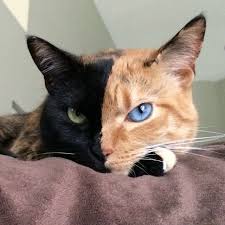 Meet Venus, a five-year-old tabby who’s become an internet sensation for her strikingly unusual appearance – half of her face is orange while the other is black!

The divide, right down the center of her face, seems too perfect to be true, so much so that you’ll be tempted to dismiss it as fake. It doesn’t help that her eyes are different of different colors as well, one green and the other blue. But on her website, Venus insists that she is 100 percent natural. “No makeup at all,” she says. “Not even eyeliner. In the salon where I get my pedicures done Photoshop and spray paint aren’t even allowed.”

Christina and Chris, Venus’s owners, first saw her at a dairy farm in North Carolina in 2009. She looked like a mixture of their other two cats – an orange tabby and a black tuxedo – so they knew they had to take her home immediately. People are always shocked when they Venus for the first time, and some have even accused the couple of dying her fur. But they insist that she was born that way and that they had nothing to do with her bizarre coloring.