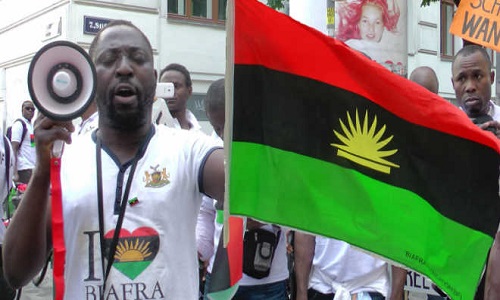 Leaders of the Movement for the Actualization of the Sovereign State of Biafra (MASSOB) yesterday disowned South-East and South-South leaders involved in dialogue over on-going pro-Biafra protests, saying they were not representing them.

The movement said it would continue the protests until the detained Director of Radio Biafra, Nnamdi Kanu, was released by the federal government.

Some prominent Nigerians Wednesday called for restraint and dialogue in the agitation for Biafra, saying dialogue, rather than violence, was the best way to solve the problem.

The elders made up of prominent personalities from the North-central, North-east, South-east and South-south regions met in Abuja under the chairmanship of a first republic minister and former Nigeria’s permanent representative to the United Nations, Maitama Sule, with the Senate minority leader, Godswill Akpabio, as guest speaker.

While Sule stressed the need for unity among all Nigerians, the Senate minority leader warned that the country could not afford another civil war, adding that resort to violence would never solve problems.

Addressing reporters in Enugu yesterday, MASSOB Director of Information, Edeson Samuel and the Secretary General Ugwuoke Ibem Ugwuoke, said nobody had been mandated by either MASSOB or the Indigenous People of Biafra (IPOB) to dialogue with the federal government on their behalf.

They maintained that any useful dialogue must be led by the detained IPOB leader, Nnamdi Kanu.

“We were shocked to learn that some northern leaders and Senator Godswill Akpabio met and discussed our agitation. These persons that sat in Abuja, even the people from the South-East, we disown them, we don’t know them. Before you discuss, you must first of all discuss with those on the streets, we don’t know Akpabio, we don’t know Dozie Ikedife as far as this matter is concerned. Ikedife is not part of what we are doing. He has shown hatred for Nnamdi, so how can he meet with government to discus Nnamdi?”

“We also understand that Ikedife’s Bilie Human Rights Initiative has its own agenda, they have firm belief in the Nigerian constitution. We, MASSOB members, don’t believe in Nigeria’s constitution because it is a fraud against our people.

“MASSOB and other pro-Biafra groups advise the Bilie Human Rights Initiative to retract their belief in the Nigerian constitution because this ties our hands to unknown laws against our people. For the past one month, we have been protesting peacefully over Nnamdi’s release, if the Nigerian government is sincere over dialogue, they must meet with the leaders of MASSOB and IPOB.

“It is curious that Akpabio, who disowned us, who said Akwa Ibom is not part of Biafra, now wants to negotiate on our behalf, this is fraud, we are advising the Nigerian government not to take them serious, we will continue our peaceful and non-violent protests. We have two simple demands- release Nnamdi Kanu, give us Biafra, we are not agitating for good roads or infrastructure.

“These people that claim to be Igbo leaders are not in control of the masses, we will soon demand for a referendum, that’s the next step so that the whole world will know that the people are no longer interested in Nigeria.

“Any dialogue with the federal government without Nnamdi Kanu is nonsense; we demand that he should be released and he will lead the dialogue”, they said.

Commenting on the former MASSOB leader, Ralph Uwazurike, who has formed a new group, the Biafra Independent Movement (BIM), they described him as a confused person.