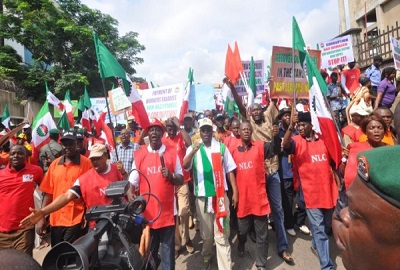 At a time when governors in the country are considering non-payment of the N18,000 minimum wage, the Nigerian Labour Congress (NLC) and the Trade Union Congress (TUC) are planning to demand for an upward review of the minimum wage.

In his remarks at the the 6th quadrennial national delegates conference of Non-Academic Staff Union of Educational and Associated Institutions (NASU) in Abuja, the factional president of the NLC, Comrade Ayuba Wabba, said that both the NLC and TUC, were currently working on a new wage demand, which would soon be presented to the Federal Government.

According to him, apart from the fact that the National Minimum Wage Act is due for review, the current purchasing power of the Naira is making the N18,000 minimum wage unsustainable.

However, the governors had in a recent meeting discussed the issue of minimum wage and resolved that they would stop payment of the minimum wage. “The situation is no longer the same when we are used to pay N18, 000 minimum wage when oil was 126 dollars; now oil price is 41 dollars,” they said after a meeting of the Nigeria Governors Forum.

Meanwhile Edo State governor and former labour leader, Adams Oshiomole has vowed to lead protests against his colleagues if any of them fails to pay the minimum wage.

“I have told my fellow governors that when the going gets tough, everybody will answer his father’s name. I am not and I will not support any government, any governor, federal or state that misunderstood the problem to focus on the weakest link.

“Be assured that you can count on me. If you want to organize protest, I will join. I will not only join to protest against refusal to pay minimum wage, but to press for the idea of minimum wage to be sustained,” Oshiomole said.