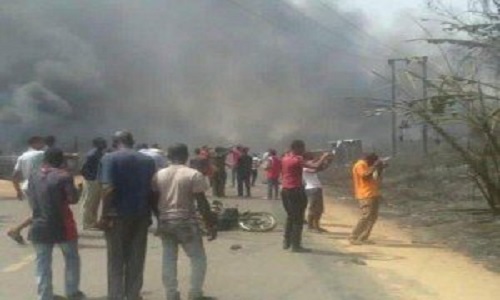 The Anambra State chapter of All Progressives Congress, APC, has called on the State government to set up a Judicial Panel of Enquiry to look into Thursday’s tragic industrial gas explosion in Nnewi, which claimed many lives and property.

The party also commiserated with the families and associates of the victims of the disaster and urged them to find the heart to bear “the great loss in what ought to be a season of joy”.

In a statement signed by the State Publicity Secretary, Mr. Okelo Madukaife on Friday, the APC said the needed Judicial Panel of Enquiry with all the required expertise, should embark on a forensic investigation of the incident, the immediate and remote cause and recommend solutions.

It also demanded a full-scale coroner’s inquest, just as it asked the Anambra State House of Assembly to set up a committee to investigate the town planning aspect of the disaster.

The statement reads in part, “The silence from Nnewi North Local Government, the only local Government without an elected leadership in Anambra State and the chorus-type comments from the state authorities after this disaster have not done much to raise hopes for a difference. There is a lot to learn from Lagos State particularly on the incident of the collapse of a building in The Synagogue Church of all Nations, killing over 80.

The opposition party also called on the state government to rise up to its responsibilities stressing, “This catastrophe has cast a dark cloud no doubt over the Christmas celebration in Anambra State, which also recently lost lives to police excesses which has not been challenged by even those to whom Anambra State people’s lives are entrusted.

“We feel saddened at the human loss, but more terribly about the penchant to deviate from planning laws and norms, in that the fire in the gas plant also killed persons from neighbouring houses.

“We are forced to ask, with eyes on the future, if gas plants are supposed to have neighbouring houses by law and logic. We have no doubt that accidents must occur from time to time, but our take is that if this plant was isolated, casualties would be less.

“Next to life, we worry about what the loss of a dynamic industry contributing its quota to the growth of the economy of Anambra State, where incentives for the emergence of other industries in the same league have been non-existent in reality.

“We call on the Anambra State Government to rise above its usual laxity that sees high government officials visit the scene of accidents early, wear rehearsed long faces, and throw cash at victims for ‘eye-service’ reasons, but stop short of taking pro-active lawful measures to forestall similar occurrences.

“We recall the burning of over 70 lives in a tanker fire in Onitsha and note that no investigations commissioned. We recall the negligence that led to the wear off of earth base supporting a concrete road bridge at Nkpor which attracted only actions at the spur of the moment. We recall other such incidents of both the incidents themselves and the management of the aftermath”.