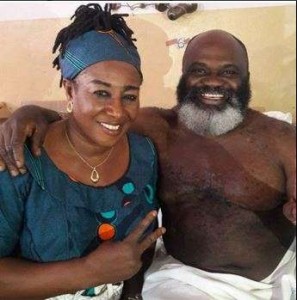 About 2 weeks ago, December 11, 2015, Nollywood actor Harry Anyanwu revealed that he was attacked by hoodlums in Enugu state

The popular actor said he was on his way from a movie set when he approached a blockade mounted by the hoodlums.

Harry Anyanwu revealed the hoodlums used an axe on his right leg.

Harry Anyanwu is currently in the hospital recuperating, and doing very fine.

The popular actor was visited by some of his colleagues such as Patience Ozokwor, and Mr. Ibu.

He was also visited by rapper Mr. Raw, and actor Chiwetalu Agu. Harry Anyanwu is known for his roles of the evil herbalist or king in Nollywood movies.