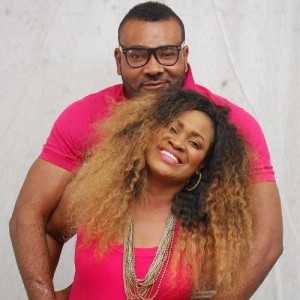 According to several reports, Prince Eke was on his way from a movie set in Asaba when he was kidnapped on the Owerri-Port Harcourt road.

The kidnappers have gotten in contact to Muma Gee and are demanding a whooping sum of 15 million Naira.
The kidnappers are allegedly threatening that Prince Eke would be buried alive if the ransom is not paid today.

Muma Gee is begging the kidnappers to free her husband with no conditions attached.

It was reported that she told them that her husband is just a Nollywood actor, and they don’t have the means to raise that amount of money within a short time.

Prince Eke made his acting debut in 2003; in 2011 he married popular singer Muma Gee.