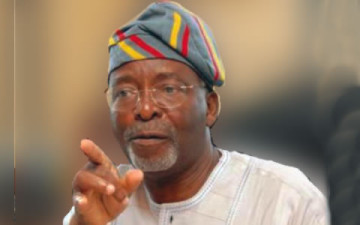 The founder of the Odua People’s Congress, OPC, Dr. Fredrick Fasehun, has asked the President Muhammadu Buhari-led Federal Government to offset its debt to him and his organization for the protection of oil pipelines.

Fasehun, who also doubles as the national chairman of the Unity Party of Nigeria, said this at a quarterly interactive media roundtable in Lagos on Tuesday.

Mr. Fasehun also insisted that his organisation was not given a penny before the contract, adding that after Jonathan’s exit, the contract was terminated by the Buhari administration and nothing was given to the OPC.

He said, “We were given the contract on March 15, 2015 and we deployed youths into the jungle. They faced insects, snakes and other wild animals and some of them even died. The government did not pay us a kobo before or during the time of the contract which ended on June 15.

“We have asked our lawyers to study the terms of the contract. An official in the NNPC told me that we had been paid but I told him that we had not received a penny. We call the attention of the powers that be to look into this. The holy books say that a worker deserves his wage”.

It would be recalled that in the build-up to the March 28 presidential election, the then National Publicity Secretary of the All Progressives Congress, Alhaji Lai Mohammed, had questioned the rationale behind the contract, which was awarded two weeks before the elections.

The then APC spokesman had alleged that Jonathan gave the OPC and other ethnic militias over N2bn as mobilisation money for them to unleash violence on the electorate under the guise of pipeline protection.

However, Fasehun urged Mohammed, who is now the Minister of Information and Culture, to withdraw the statement and correct the wrong impression.

Fasehun said, “Someone who is now a minister once told Nigerians that I collected N2.8bn. Lai Mohammed, who I call a liar, is now the government’s mouthpiece and he must correct that impression”.

The OPC leader also said Nigerians had yet to see the change the APC promised during the electioneering, noting that Buhari had spent over six months in office but had failed to impress Nigerians.

“Nigerians are angry today. They wanted a change and cheered when the APC came into power but the cheer has now become a jeer. Let the government know that this is not the change Nigerians voted for”, he added.