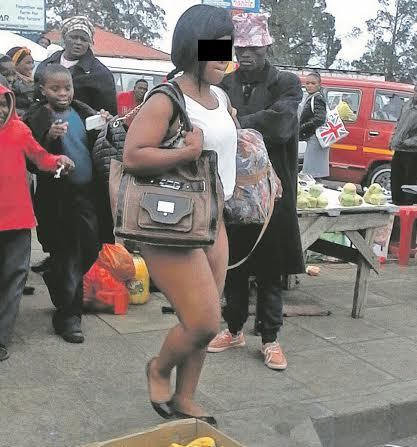 A young woman wearing only a white shirt and pant!es was seen at a Taxi park in northern KZN, South Africa.
According to Daily Sun SA, who shared the photo, the incident happened on Tuesday evening. Commuters, taxi men and passersby looked on in shock when the woman appeared. When she realised that people were staring, making cat calls, taking photos and laughing, she jumped into a taxi and took out a skirt from one of her bags and put on.
An eyewitness, Bongani Zondi said people at first thought she was mentally unstable but later realised she was not.
“She looked fine. But it was the first time a thing like this has happened at our taxi rank. That’s why people got excited and took pictures,”
He added the police were called to ease the situation and they took the woman away.
Chairman for Nguthu Taxi Association, Mthandeni Ndlovu who confirmed the incident said they were surprised to see a half-naked woman at their park.
“We know it is summer and people are allowed to wear anything that makes them feel cool. But in Nquthu, we are not familiar with half-naked people, because we are a rural area. Seeing that woman shocked us”
Source:Olufamous
AdvertisementABUJA DOCTOR REVEAL THE UNIQUE WAY TO PERMANENTLY CURE WEAK ERECTION, SMALL AND SHAMEFUL MANHOOD AND INFERTILITY ISSUES WITHOUT SIDE-EFFECTS WITHIN SHORT PERIOD!! DON'T BE A VICTIM!! Click Here for More Details