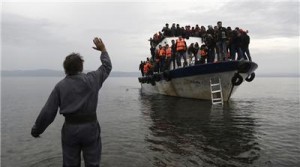 The number of “refugees and migrants” arriving by land and sea to the European Union passed the one million mark this year, according to the UN refugee agency and the International Organization for Migration. The new figures, jointly released by UNHCR and IOM, listed the arrivals in six European countries since January 1, with the vast majority of people – 821,008 – landing in Greece.

Half of those arriving to Greece, Bulgaria, Italy, Spain, Malta and Cyprus by December 21 were Syrians fleeing war, another 20 percent were Afghans, and seven percent were Iraqis. Some 3,600 died or went missing, including 422 deaths at sea, the two agencies added on Tuesday.

“We know migration is inevitable, it’s necessary and it’s desirable,” IOM chief William Lacy Swing said in the statement. “But it’s not enough to count the number of those arriving, or the nearly 4,000 this year reported missing or drowned. We must also act. “Migration must be legal, safe and secure for all-both for the migrants themselves and the countries that will become their new home.”

The UN refugee agency UNHCR is planning for arrivals to continue at a similar rate in 2016 but the IOM said it was impossible to forecast future numbers. “So much is in the balance, the resolution of the Syrian war, and the disposition of the European border protection moves that are being contemplated,” said an IOM spokesperson.