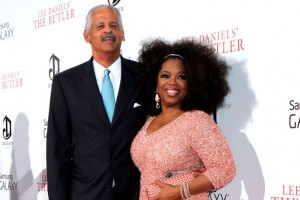 Billionaire and media mogul, Oprah Winfrey, has shown that she also has a playful and love life in her too.

Oprah shared a loved up photo of herself with her Fiancé, Stedman Graham.

Oprah, 62, has been engaged to Graham, 65, since 1992 and they obviously still have things going well for them.

The couple were pictured at sea, with Oprah’s arms wrapped around Graham, as they smiled at the camera.

The media mogul, made popular for the lives she has touched all over the world, had once revealed in an interview that she and Graham wouldn’t have lasted this long is they had gotten married.
During the interview, the media mogul said:

“If you ever interviewed him, he would tell you that had we married, we would not be together today.

“Because he’s a traditional man and this is a very untraditional relationship.

“I think it’s acceptable as a relationship, but if I had the title ‘wife,’ I think there would be other expectations for what a wife is and what a wife does. First of all, you’ve got to come home sometimes”

This just might be the secret to their long lasting relationship, as they still look so in love, so many years later.