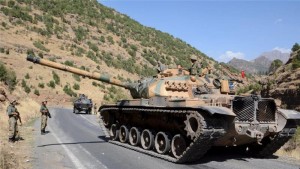 The number of Kurdish fighters killed during a large-scale military offensive in Turkey’s restive southeast has jumped to 102, a security source said on Sunday as the operation entered its fifth day. At least two soldiers and five civilians have also been killed in the clashes, the source told the AFP news agency.

An earlier toll released on Saturday put the figure at 70 dead, with the army saying all were suspected members of the Kurdistan Workers’ Party (PKK). Some 10,000 troops backed by tanks have been deployed to the southeast to try to rout PKK fighters from urban areas, according to local media.

The operation – which has targeted the towns of Cizre and Silopi in Sirnak province, as well as a neighbourhood in Diyarbakir, the largest city in the region – began on Wednesday, according to the army. Commenting on the ongoing operation, Turkish Prime Minister Ahmet Davutoglu said on Saturday the military would “flush out” all PKK fighters across their territory.

The Turkish government has imposed a 24-hour curfew in the southeastern towns. Turkish police fired tear gas and water cannon on Sunday to disperse hundreds of protesters on an Istanbul street calling for an end to curfews in the southeast.