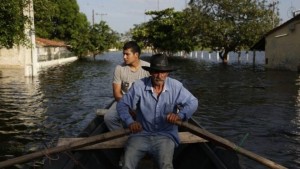 More than 150,000 people in Paraguay, Argentina, Uruguay and Brazil have been driven from their homes by some of the worst flooding in years. Heavy summer rains have caused rivers to swell across a vast area. In Paraguay, the most affected country, President Horacio Cartes declared a state of emergency, freeing up $3.5m (£2.3m) in relief funds. BBC reports:

The Paraguay river in the capital, Asuncion, is just 30cm (12in) away from overtopping its banks. That could lead to widespread flooding in the Asuncion area. And it could affect thousands of other people who live by the Paraguay – the country’s main river – the authorities said.

Nearly 200 electricity pylons have been damaged or destroyed by strong winds. Four people were killed in the country by fallen trees. In northern Argentina, some 20,000 people have been evacuated. At least two people have died in the floods, which have mostly affected the provinces of Entre Rios, Corrientes and Chaco.

In the southern Brazilian state of Rio Grande do Sul, nearly 1,800 families in dozens of towns had been forced to leave their homes. Heavy rain began to fall in the region on 18 December, swelling the Uruguay and Quarai rivers.

South of the Brazilian border, in Uruguay, thousands of people have been made homeless in the past few days. But most of them have now returned home. Dry weather is forecast for the Brazilian-Uruguayan border region in the next few days, but in Paraguay and Argentina water levels are still expected to rise.