Pastor, 60 Impregnants Teenage Girlfriend, Marries Her With Consent Of His Wife

A member of the house of representatives from Kano state, Nasiru Ali has begged his colleagues in the house...
Read more

The Speaker of the 9th Assembly, Femi Gbajabiamila has reiterated the stand of the house of Representatives to continue...
Read more

More than 118 persons have been killed by Lassa fever in the last eight weeks according to the Nigeria...
Read more

Lai Mohammed, minister of information, has explained that Boko Haram is targeting Christians so as to trigger a religious...
Read more 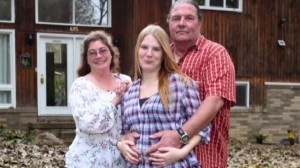 A 60-year-old pastor has married his pregnant teenage girlfriend – with the blessing of his first wife. Thom Miller met his first wife, 44-year-old Belinda, who had seven children from a previous marriage, eight years ago. But having discussed polygamy after Mrs Miller suggested finding another woman to be part of the family, the pair from Mansfield, Ohio, decided to welcome 19-year-old Reba Kerfootruba into their relationship.

Speaking to Barcroft TV, Mr Miller said he was a friend of Ms Kerfootruba’s family and knew her when she was younger.

He said the couple bumped into her while volunteering at the church and she moved into their home shortly after. Mr Miller said: “I’ve known Reba for a long time, then she moved away and I hadn’t seen her for years.  “When she hugged me, it wasn’t a normal hug and I wanted to keep hugging her and I realised, wow, I’m really appreciating this woman.”

Belinda said: “I wanted to have more of a family, I wanted to be complete, and having another lady in the house not only makes our family as a whole, but individually it’s a beautiful thing because it’s like having a sister around.”