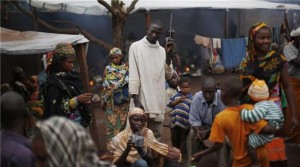 People in the Central African Republic (CAR) are voting on Wednesday in a crucial election that it is hoped will restore peace and democracy to a divided country scarred by years of violence. The presidential and parliamentary vote has been delayed several times, with the latest date set for Sunday pushed back again by three days to allow officials deal with technical and organisational difficulties.

“This time, everything will be fine throughout Central African Republic,” said Julius Rufin Ngoadebaba, spokesman for the National Electoral Authority, rejecting allegations that illegal voter cards had been distributed. Thirty candidates are competing for the presidency, with some of the frontrunners including former prime ministers Martin Ziguele and Anicet Georges Dologuele.

Other top candidates include a former foreign minister, Karim Meckassoua, and Bilal Desire Nzanga-Kolingba, who is the son of a former president. More than 1.8 million people are expected to vote, at more than 500 polling stations across the country, which has been ruled since May 2014 by interim President Catherine Samba-Panza.

CAR has been rocked by violence since March 2013 when a largely Muslim alliance of rebel groups known as the Seleka overthrew President Francois Bozize. When a Seleka’s leader left power under intense international pressure in 2014, a swift backlash by the Christian anti-Balaka groups against Muslim civilians followed.