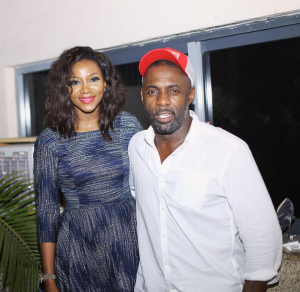 Veteran Nollywood actress, Genevieve Nnaji was chanced to meet someone most woman would literally kill to touch.

The pretty businesswoman and actress hooked up with Idris Elba at the Lagos premiere of his hit movie titled ‘Beasts of No Nation’ in Lagos last night.

The actress was also pictured with Ngozi Okonjo Iweala.

See the photo below: –