Pandemonium broke out, yesterday, when scores of students of the D.S Adegbenro ICT Polytechnic, Itori, in Ewekoro Local Government area of the state, went on rampage at the Itori end of the Lagos-Abeokuta Expressway, over the death of one of their colleagues who was reportedly crushed by a truck. 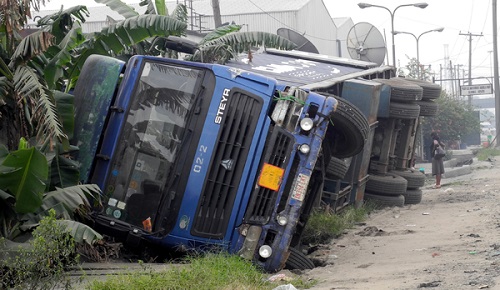 Vanguard gathered that, the victim, who was identified as Ahmed Oladimeji, was an OND 2 student of Business Administration of the institution.

It was learnt that the deceased was reportedly crossing the Expressway in front of the school, when he was knocked down and crushed by the truck.

A source told our correspondent that the victim was on his way to the school to collect his Industrial attachment letter in school when he met he was crushed to death .

An eye witness told Vanguard that there had been an accident when a truck fell on the road which forced every vehicle coming from Lagos, Ota among others to take one way, facing oncoming traffic from Abeokuta, at Itori axis.

According to the findings, the truck was on its way to Abeokuta when it crushed the victim, who probably was not aware that the traffic on both lanes had been collapsed to a single lane.

The students on hearing the sad news about the incident were said to have raced to the scene, but the driver of the truck had escaped.

However, they descended on the truck and set it ablaze. The students were said to have disrupted the traffic, which led to a gridlock.

The protesting students were said to have held up traffic for almost four hours, lasting from 11am till 3pm.

One of those caught up in the gridlock, Adesanmi Sunday said, “It was like a war zone, the students did not allow any vehicle to pass through. The students made bonfires on three different spots between their campus and Itori town.”

Some of them were said to have vandalised vehicles who defied their ‘no movement’ order.

The registrar of the institution, Mr. Bayo Ogundimu, who spoke to newsmen on the telephone confirmed the incident.

He said the victim had just completed his ordinary diploma programme and was heading school to collect letter for his Students’ Industrial Work Experience Scheme when he crushed by the truck.

He said, “The truck that killed him was coming from Lagos-end and heading to Abeokuta. You know many of those truck drivers are reckless.

“There was a trailer that fell around Itori-Wasinmi axis, and the traffic on both lanes were collapsed into one. It became one-way for those coming from Lagos, because they were facing those coming from Abeokuta.”

Ogundimu who expressed sadness at the incident said the school authorities rushed to the scene with an ambulance and was conveying the victim to the General Hospital, Ifo, but he died on the way.

“We tried our best to save his life but he died on the way to the General Hospital, Ifo,” he said

He said the appeal by the authorities of the school for the students’ to stop the protest fell on deaf ears.

The state Police Public Relations Officer, Muyiwa Adejobi, also confirmed the incident, and said the police had to later disperse the students with canisters of teargas, as they became violent.

He said, “We learnt hoodlums had hijacked the students’ protest. They were extorting motorists in the process, so our men had to disperse them by firing canisters of teargas.”