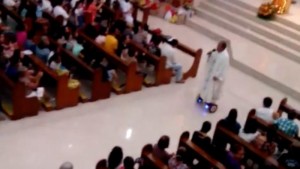 A Catholic diocese in the Philippines has suspended a member of its clergy for welcoming parishioners to the final blessing of the Christmas Eve mass on a hoverboard. The priest, at the diocese of San Pablo in Laguna, was filmed riding the self-balancing scooter up and down the aisles, to the applause and evident delight of some of the congregation.

The diocese issued a statement in the form of an image post on its Facebook page on Tuesday night.“As a way of greeting his parishioners, the priest sang a Christmas song, while going around the nave standing on a hoverboard,” it said. “That was wrong.”

It condemned the priest’s behaviour as an attempt to “capriciously introduce something to get the attention of the people”, and said he would “spend some time to reflect on this past event”.The church named the priest as Father Albert San Jose.

Comments on the statement suggested the controversy had split the congregation.Facebook user Helena Horwath expressed approval of the church’s handling of the issue.“Very good. That is all that is needed. Let’s say an Ave for Father, especially that his vocation be rejuvenated by his time out of the Parish.”But another commenter, Brian Hughes, said the Catholic church needed to do more to attract young people.