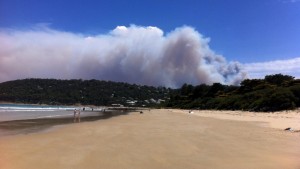 At least 116 homes have been destroyed in a bushfire that continues to rage along the coast of Australia’s southeastern state of Victoria, but so far no deaths have been reported. The majority of the homes were lost at Wye River and Separation Creek, small holiday communities about 160km southwest of Melbourne on the picturesque Great Ocean Road, officials said on Saturday.

Victorian state Premier Daniel Andrews said the property losses “confirmed for us just how hot, just how volatile, just how intense this fire was, burning right to the water’s edge”, the ABC reported.

Hundreds of families were evacuated from their homes and an emergency warning remained in place in Wye River and Separation Creek on Saturday afternoon local time. Firefighters are continuing to battle the blaze. A lightning strike is believed to have sparked the fires in Victoria about a week ago. They have since burned more than 2,000 hectares.

Authorities warned on Saturday that the fire risk in Victoria would continue over the next two months, as southern Australia bakes in summer heat. “This fire doesn’t go away. This fire is a fire that will remain with potential to burn in January and February this year,” Victorian emergency services commissioner Craig Lapsley said.