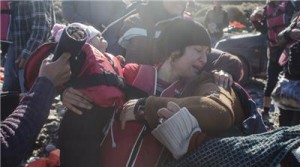 Greek authorities say they could end up spending $500m this year trying to contain the refugee crisis, with further revenue losses from declining tourism. The European Union reimburses most of the money Greece spends building and maintaining camps for the tens of thousands of refugees making the journey from Turkey to any one of dozens of Greek islands in the Mediterranean Sea.

Since the crisis escalated earlier this year, the number of tourists visiting Greece has declined leading to lower than expected revenues in what is one of the country’s top sources of income. But as resorts report fewer customers, smaller businesses catering to refugees are reporting an increase in sales.

Al Jazeera spoke to vendors on Lesbos who said their takings were higher than usual because of the refugees. Vasso Koinaki, who owns a food van, said on some days she was making up to 2,000 euros ($2,200) a day. “In the [peak time] we made up to 2,000 euros a day. Now about 500 euros. Before we made just 50 euros a day,” Koinaki said.

Richer refugees are helping keep hotels that are usually quiet in the winter busy, as is the flow of extra police officers and aid workers arriving from the mainland to deal with the crisis. The windfall from the influx of refugees is to a degree mitigated by falling tourism revenues. Charter companies are calling off flights and cruise ships are avoiding islands worst hit by the crisis.