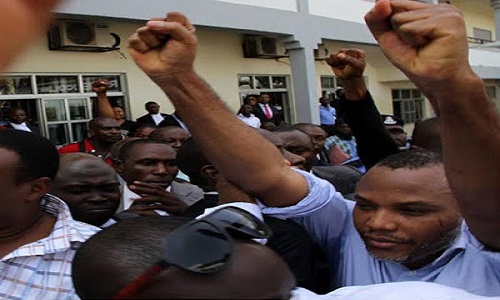 A renowned cleric, Prophet Anthony Nwoko of the Church of God, has called on President Muhammadu Buhari to order the immediate release of founder of the Indigenous People of Biafra, IPOB, Nnamdi Kanu saying failure to do so, “heavens will strike!”

The Federal Government, through the Department of State Security, DSS, has arraigned Kanu before a federal high court on treason charges.

But Prophet Nwoko, who gave the warning to release Kanu, who has been in detention since October 2015 during a crowded press conference at the end of a Prayer Summit organised by 24 pastors in Enugu, with the theme ‘Possessing the land’, said: “I cannot find any clean political leader from the South East. The governors are selfish, self-centered, and have never pursued any action that will uplift the overall well-being of Igbo nation”.

He also urged the president to urgently release the detained IPOB leader as it was an act of injustice to detain a man, who he claimed did not commit any crime.

He also challenged religious leaders in the South East geopolitical zone to “step forward now and fulfil God’s mandate for the Igbo nation”.

He continued: “The religious leaders saw the glory in the country but could not deliver the message to the nation, the judgment will be upon them for denying Christ, his glory. I was spiritually crowned for the nation and the world and was sent on a special mission for the glory of God.

“They should allow this light to materialize, if not crisis will overrun the nation as a whole, Prophet Nwoko is a chosen prophet, Igbos should seek for the prophet. The truth is finally here, but Nigeria finds it difficult to believe, the nation refuses to recognize the presence of the anointed saviour of the world because of tribalism”.