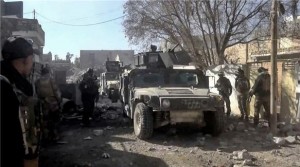 Iraqi forces have retaken large parts of Ramadi from Islamic State of Iraq and the levant (ISIL) fighters, but officials expect the city’s “liberation” to take longer than initially expected. Intense fighting between Iraqi forces – comprising the army, tribal groups and local police – and ISIL fighters continued on Thursday, two days after the latest operation to recapture the city began in earnest.

Iraqi intelligence believe there are only a few hundred rebels left within the city, but booby traps – containging explosive material capable of damaging 25-tonne vehicles – have slowed their progress.

On Thursday afternoon, a number of improvised explosive devices (IEDs) exploded on al-Dhubaat Street in the city’s south, killing 10 Iraqi troops and injuring another 16, military sources told Al Jazeera. A day earlier, Iraqi government and military officials said they expected the Anbar provincial capital to be liberated within about 72 hours, but that target appears to have been pushed back.

Al Jazeera’s Waleed Ibrahim, reporting from Baghdad, said the language being used by military and political leaders has changed dramatically. “Some leaders had said the liberation of the entire city will take 72 hours. Now leaders say they are [still] fighting and the liberation of Ramadi will take a longer time,” he said. Our correspondent said Iraqi forces were being slowed significantly by snipers, IEDs and booby-trapped buildings.