Saudi Arabia Hikes Petrol Prices By 40% At The Pump 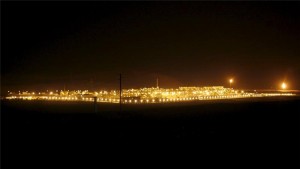 The budget deficit is the highest in the history of Saudi Arabia, but was not as big as some expected. The International Monetary Fund had projected a deficit of $130bn.

The kingdom has seen a sharp drop in revenues as oil prices have fallen more than 60 percent since mid-2014 to below $40 a barrel. Public revenues are the lowest since 2009 when oil prices dived as a result of the global financial crisis. Saudi income for 2015 was 15 percent lower than projections and 42 percent less than in 2014.

In order to address the situation, the Gulf kingdom has set the price of 95 octane gasoline at 0.90 riyals ($0.24) per litre up from 0.60 riyals per litre – a hike of 40 percent. The price increase takes effect on Tuesday, the official SPA news agency said on its Twitter account. The decision came hours after the ministry of finance said it will slash subsidies for electricity, water, diesel and kerosene over the next five years.