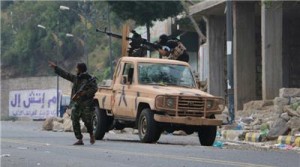 A ceasefire between Yemen’s Houthi group and the Arab coalition is in danger of collapse, with each side accusing the other of violating it. The threat of collapse appeared just hours after a mass local-level prisoner exchange on Wednesday, coinciding with UN-sponsored talks in Switzerland. Aljazeera reports:

Brigadier General Ahmed al-Assiri of the Arab coalition said the Houthis had repeatedly broken the ceasefire and that his forces were responding.  The truce was intended to last for seven days and coincide with the peace talks to try to end a nine-month-old civil war between the Houthis based in Yemen’s north and the coalition-backed southern and eastern fighters loyal to President Abd-Rabbu Mansour Hadi.

“The number of violations is around 150 and this does not show honest intentions,” Assiri told Al Ekhbariya television. “We urge the United Nations to clarify to the Houthis that there will be no patience towards these practices and the truce could collapse at any moment.”

The remarks came after a spokesman for Yemeni government forces loyal to former President Ali Abdullah Saleh, an ally of the Houthis, accused the Arab coalition of a “serious escalation by land, sea and air”, according to the Houthi-controlled Saba news agency.