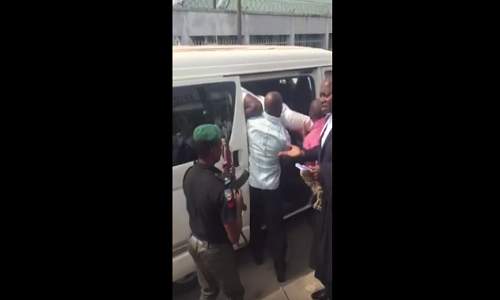 The immediate past Director General of the Nigerian Maritime Administration and Safety Agency, NIMASA, Patrick Akpobolokemi, was yesterday manhandled by security operatives at the premises of the Federal High Court, Ikoyi.

In a video footage uploaded to YouTube, the former NIMASA boss was seen in a heated exchange of words with two armed mobile policemen and two other unidentified men in plain clothes.

As lawyers, including the counsel to the former NIMASA DG attempted to intervene, the security operatives bundled him into a waiting white Toyota Hiace bus and sped off immediately with him.

It would be recalled that Mr. Akpobolokemi, seven other staff of the agency and two companies were arraigned on December 3, before Justice Salihu Sa’idu of the Federal High Court, Lagos on a 30-count charge bordering on conspiracy, fraudulent conversion of funds and money laundering.

They were accused by the EFCC of conspiring to convert and launder several sums of money running into several billions under the pretext of providing security intelligence around the maritime domain.

Confirming the incident in a telephone interview with PREMIUM TIMES, counsel to Mr. Akpobolokemi, Wilson Ajuwa, said he feared for the life of his client.

“For some reasons, he has been under investigation for the last six months since President Muhammadu Buhari came into power,” Mr. Ajuwa told PREMIUM TIMES.

“He has been going to the EFCC back and forth and all sort of things are happening. The EFCC has invited the wife, his brothers and maltreated them.

“Both courts granted him bail after he was remanded in Ikoyi Prisons for seven days. His trial was supposed to start last week Tuesday but the court was adjourned for today.

“While we were in court, they filed a 2000 page proof of evidence and the counsels were unable to review the document and prepare their defence.

“The judge was averse to a prolong adjournment but decided to give the defence the benefit of the doubt by adjourning further hearing on the matter till January 18, 2016”.

Just as Mr. Akpobolokeimi stepped out of the courtroom, Mr. Ajuwa said persons suspected to be SSS operatives appeared with a detachment of policemen and beat him up.

He said the operatives used force to re-arrest Akpbolokeimi even after he had secured bails from two different court where he was charged by the Federal Government.

“It took us seven days to perfect the bail in both courts and so he is under two bails at the time they took him away”, his lawyer told PREMIUM TIMES.

Asked if the government prosecutors had sought to squash the bails granted Mr. Akpobolokemi during the court sitting, Mr. Ajuwa responded in the negative.

Already, he said the matter had been reported to Justice Buba and a motion filed for the former NIMASA boss to be produced in court on Tuesday.

“With the way they treated him, we don’t know whether the man is alive or not. They beat him thoroughly before bundling him into their vehicle. The video is there for people to see”, Mr. Ajuwa said.