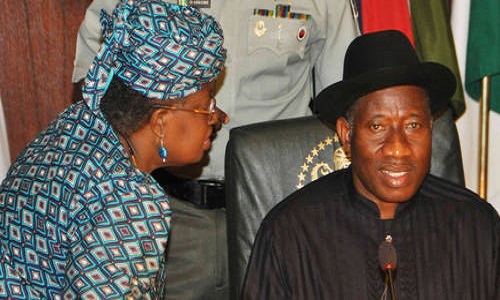 As more startling revelations about the mismanagement of Nigeria’s finances under the immediate past Goodluck Jonathan administration continue to emerge, PREMIUM TIMES has reported how the Minister of Finance in that government, Ngozi Okonjo-Iweala, illegally approved the transfer of at least N61.4 billion ($300 million and £5.5 million) from funds recovered from late dictator, Sani Abacha, to the Office of the National Security Adviser, Sambo Dasuki, few weeks to the 2015 presidential election.

It would be recalled that there were allegations that the then Peoples Democratic Party-led federal government was ferrying cash from the treasury to bribe influential individuals, groups and traditional rulers, to mobilize support for the re-election of Mr. Jonathan, who still went on to lose the elections.

The online news platform reports that Mrs. Okonjo-Iweala approved the transfer of the monies then looked sideways as to how it was spent.

It also reported that the funds were never appropriated for before they were transferred, in clear violation of the country’s fiscal responsibility law.

The recovered Abacha loot are funds returned by the Swiss Government to the Nigeria from monies stolen from the country’s treasury by the late dictator, who was alleged to have fetched an estimated $5 billion from the public till for himself and stashed them in offshore accounts.

It is believed that not less than $700 million has been repatriated from Switzerland alone on the condition that the World Bank monitors how the funds would be spent.

But a letter signed by the former finance minister and seen by PREMIUM TIMES, showed that 50 per cent of the recently recovered Abacha loot was allotted for “urgent security need” such as the procurement of arms and ammunition for the Nigerian Armed Forces, while the other half was set aside to be used for development purposes.

The letter dated January 20, 2015 and addressed to then President Jonathan, revealed that the money was transferred following a January 12, 2015 request by the office of the NSA under Dasuki, a retired army colonel, for funds for the procurement of arms and ammunition as well as intelligence equipment.

“The NSA has explained that this is to enable the purchase of ammunition, security, and other intelligence equipment for the security agencies in order to enable them fully confront the ongoing Boko Haram threat.

“His request is sequel to the meeting you chaired with the committee on the use of recovered funds where the decision was made that recovered Abacha funds would be split 50-50 between urgent security needs to confront Boko Haram and development need (including a portion for the Future Generations window of the Sovereign Wealth Fund)”, Mrs Okojo-Iweala wrote.

The former minister, who has consistently denied her involvement in the ongoing arms deal scandal, added that the letter was to seek Mr. Jonathan’s approval for the funds to be disbursed to the ONSA.

She further explained that the money being transferred formed part of the Federal Government Independent Revenue.

However, instead of insisting on overseeing how the disbursed funds were spent as the country’s chief financial officer, Mrs. Okonjo-Iweala chose to push that responsibility to the president.

“This letter is to seek your approval to borrow these funds, for now, to disburse to the NSA. These funds form part of the projected Federal Government Independent Revenue, to be appropriated, in the light and for accountability, given the peculiar nature of security and intelligence transactions, we would expect the NSA to account to Your Excellency for the utilisation of the funds”, she concluded.

The transfer was approved in a January 30, 2015 letter by Mr. Jonathan.