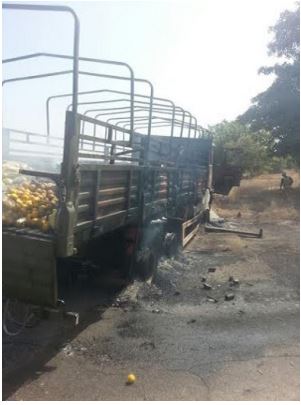 A search and rescue team that was sent to Bokos general area has recovered corpses of a soldier and a civilian JTF, as well 6 burnt AK-47 rifles. The team has also intensified search for a missing soldier. The Explosive Ordinance Device element on the team have discovered and detonated an Improvised Explosive Device buried along the road.

They have also found out and destroyed Boko Haram terrorists hideout in the area. It will be recalled that Ngurosoye has been cleared of terrorists months ago, but some elements of Boko Haram terrorists that were thought to be innocent civilians, sneaked into that and sprang an ambush on troops escorting supplies to our force at the front lines yesterday.

Despite the unfortunate incident, troops morale remain very high and they have continued with their patriotic duties of searching for and destroying the Boko Haram terrorists in their enclaves.

Share
Facebook
Twitter
WhatsApp
Previous articleSEE What Will Smith Was Spotted Doing To His Wife’s B*tt [PHOTO]
Next articleBoko Haram Behead Residents After Attacking Their Village In Borno
- Advertisement -Ad ==> Discover how a young Nigerian graduate now makes a consistent 40k per week doing a legitimate online business. You too can start yours now, click here!!!