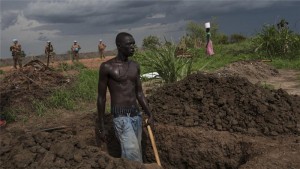 South Sudan on Tuesday marked two years since the start of a war that has forced one million people from their homes and left four million hungry as politicians broke at least eight commitments to peace. The country descended into conflict in December 2013 after President Salva Kiir accused his former deputy Riek Machar, who he had sacked earlier that year, of plotting a coup.

The clashes that followed set off a cycle of retaliatory killings that have split the world’s newest country, which won its independence from Sudan in 2011, along ethnic lines. As President Kiir – from the Dinka ethnic group – fought it out with rebels allied to Machar – a Nuer – both sides committed atrocities, including massacres and gang rape, according to the UN and the African Union.

Thousands of child soldiers have fought in the conflict, used as foot soldiers by both government and opposition forces, the US-based Human Rights Watch said.

Both sides have repeatedly accused each other of breaking a ceasefire that was agreed to in August, and a key deadline for Machar to return to the capital from his base in the bush was missed last month. Even with thousands of people sheltering inside UN camps across the country, many are still cut off from food and medical care, especially in the north near the border with Sudan.