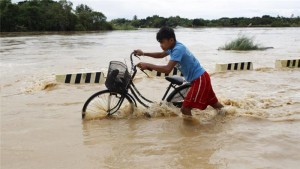 Heavy rains continue to pummel the Philippines, threatening to aggravate flooding that has prompted the government to declare a state of “national calamity”. The death toll after a week of devastating weather has risen to 35, according to confirmed reports from national and local disaster monitoring agencies.

Tropical depression “Onyok” weakened on Saturday into a low pressure area, but continued to bring rains to the central Visayas islands and Mindanao, the main southern island, according to government weather authorities.

Cold monsoon winds blowing from the northeast brought rains to Luzon, the main northern island, where large farming communities have been submerged in mostly waist-deep floods from Typhoon Melor, which hit at the start of the week.

Meanwhile, the state weather bureau forecasted cloudy skies with moderate to occasional heavy rains and thunderstorms over Mindanao, Bicol region, Central and Eastern Visayas, and the provinces of Aurora and Quezon. These may trigger flash floods and landslides, according to the Philippines state news agency (PNA).