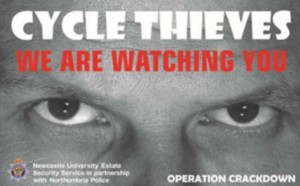 English researchers discovered that objects with “watching eyes” printed on them can help discourage littering. A study out of Newcastle University in Northeast England found that people were less likely to carelessly discard pamphlets with eyes clearly printed on them than similar pamphlets where the eyes were obscured. UPI reports:

According to the study, written by professors Melissa Bateson and Daniel Nettle of the Centre for Beavhiour and Evolution only 4.7% of people dropped the pamphlet with eyes while 15.6% dropped the pamphlet when the eyes were obscured. “Our work shows that the presence of eye images can encourage co-operative behavior and we think this is because people feel they are being watched,” Nettle told Neuroscience News.

The study used pamphlets warning against bike theft with the message “Cycle thieves are watching you.” written in large text. One set of pamphlets featured a stern set of male eyes while the other had the eyes obstructed by a bicycle lock. The pamphlets were then placed on various bikes in such a way that the owner would have to remove them before riding.

The same pamphlets were used in an experiment regarding bike theft but were re-used for this experiment to determine if the message played a factor in people’s behavior. “As we care what other people think about us, we behave better and more honestly when we feel we are being observed,” Nettle said. “This is reinforced by our results as we show that we didn’t need to include a message about littering, people know it is antisocial so it was enough to have an image of the eyes.”