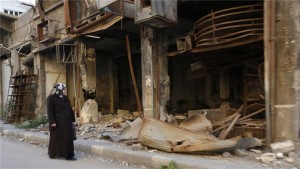 Syrian opposition groups say they are ready for UN-sponsored negotiations with representatives from the government, but insist that President Bashar al-Assad has to step down. “The aim of the political settlement is to create a state based on the principle of citizenship without Bashar al-Assad or figures of his regime having a place in it or any future political arrangements,” the group of rebel factions said in a statement issued at the end of two-day talks held in Saudi Arabia’s capital city, Riyadh.

“Participants have insisted that Bashar al-Assad and his aides quit power with the start of the transition period,” the statement added. Hosted by the Saudi Arabia, the unprecedented talks between more than 100 representatives from armed and political opposition groups tried to unite the factions fighting against the Syrian government in the bloody conflict which has seen more than 250,000 people killed.

Monzer Akbik, a member of the National Coalition opposition bloc, said the meeting agreed to set up a 25-strong leadership group, including six coalition members, six from rebel factions, five from the NCB and eight independent figures. “These are representatives of all the opposition factions, political and military, and they are going to be the decision makers in terms of the political settlement,” said Akbik. He was speaking from the United Arab Emirates after being briefed on Thursday morning’s talks. A separate negotiating team of 15 members would also be appointed, he told Reuters. The groups said they are prepared to meet the government in the first 10 days of January.