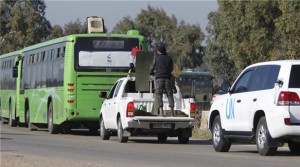 Hundreds of Syrians, including rebel fighters, have left the last rebel-held area of Homs as part of a rare local ceasefire deal negotiated between the opposition and the government. The fighters and their families were being moved to rebel-held areas of the northwest near the Turkish border on Wednesday.

Homs was a centre of the uprising against President Bashar al-Assad.

The deal follows a major Syrian army ground offensive to the north of the city backed by Russian air strikes. Witnesses saw 15 buses leave the area. Homs governor Talal al-Barazi told reporters that 300 fighters were on board, together with 400 members of their families. The fighters took light weapons with them, he said.

The deal echoes a local ceasefire agreed in September elsewhere in Syria under which rebel fighters were supposed to be transferred to Idlib, though it has yet to be fully implemented.

Al Jazeera’s senior political analyst, Marwan Bishara, said there is a “certain will on both sides to calm things down, especially in places where it’s clear that one party has the upper hand over the other”.