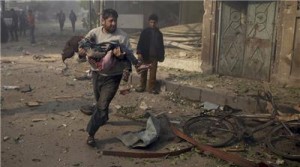 The main Syrian opposition bloc, with allied rebel forces on the ground, says it will not agree to a ceasefire unless Bashar al-Assad signs an agreement to step down as president of Syria.

The comments came on Wednesday as the United States and Russia prepared for the next Syrian peace talks in New York on Friday. “If they [US and Russia] want to fight terrorism as they say, why not get rid of the main problem, the government that is targeting civilians in Syria everyday?” Naghm al-Ghadri, vice president of the Syrian National Coalition (SNC), told Al Jazeera.

“The US and Russia have always disagreed on the fate of Bashar al-Assad, but agreed on countering [the Islamic State of Iraq and the Levant], which is ironic because instead of getting rid of the root of all problems, they want to tackle an product that is a result of the government.

“It is our basic right to choose what we want for our country. We are not waiting for anyone to tell us that the fate of a Syrian leader lies with the Syrian people. We were born with this right.