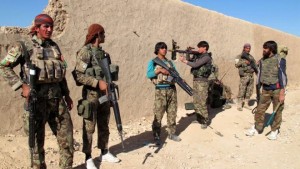 Fierce fighting is continuing around the police HQ in Sangin, in the Afghan province of Helmand, as security forces try to hold off a Taliban attack. Police Commander Mohammad Dawood told the BBC via satellite phone that he was surrounded by Taliban fighters and that he needed urgent help.

Otherwise, he added, he and his men couldn’t hold for long as they were running out of ammunition. Helmand’s governor says the whole province could fall to the Taliban. “The bazaar is closed; we have been surrounded for the past two days,” Commander Dawood told the BBC’s Mahfouz Zubaide.

“I have casualties lying around me; we haven’t eaten for the past two days. If we don’t get support in the next hour or so, our fighters will be captured alive. “We only have the police HQ under our control and have a battalion of the national army with us. The district office and the intelligence directorate are under enemy control.” Earlier, the deputy governor of Helmand complained of a lack of government support in an open letter on Facebook to President Ashraf Ghani.

Mohammad Jan Rasoulyar warned that the province could fall to the Taliban. He said at least 90 soldiers had been killed in the latest fighting and claimed Mr Ghani’s entourage was not telling him the reality of the situation. “Helmand will collapse to the enemies and it’s not like Kunduz, where we could launch an operation from the airport to retake it. That is just impossible and a dream,” he said.