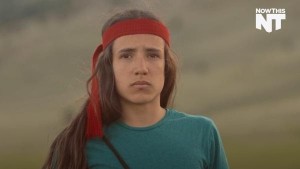 Xiuhtezcatl Tonatiuh became a climate change activist at age 6 when he saw an environmental documentary. He asked his mom to find a way for him to speak at a rally. Now 15, the long-haired, hip-hop-savvy Coloradan is one of 21 young activists joining climate scientist James Hansen in suing the Obama administration for failing to ditch fossil fuels. “It’s basically a bunch of kids saying you’re not doing your job,” he told me here at the U.N. COP21 climate change summit in Paris.

“You’re failing, you know. F-minus. We’re holding you accountable for your lack of action.” I’m not sure what will become of his lawsuit (although it’s clear the fossil fuel industry feels threatened by it;it’s apparently trying to get the legal action dismissed), but Tonatiuh’s voice is an essential one as more than 140 world leaders and thousands of policy wonks and journalists convene here for the most important climate change summit in history. He’s part of the “generation with the most to lose,” he told me.

On Monday, after the climate summit opened with a bizarre version of the green-carpet Oscars, with presidents crawling out of fancy cars and looking for photo-ops (why weren’t any of them riding bikes!? I would have loved that), U.S. PresidentBarack Obama, a defendant in the 15-year-old’s lawsuit, gave one of the most anticipated speeches of the summit.

“I’ve come here personally, as the leader of the world’s largest economy and the second-largest emitter, to say that the United States of America not only recognizes our role in creating this problem, we embrace our responsibility to do something about it,” Obama said.