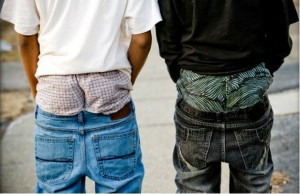 Two high school students in Tennessee spent 48 hours in jail because they came to school in sagging pants. The Huffington Post reports four students at Bolivar Central High School, which is about 70 miles east of Memphis, were charged with indecent exposure in early November because they wore sagging pants. Two of the students were jailed, including Antonio Ammons.

Ammons told NBC station WMC he’d never been to jail before and was placed with other inmates. In addition to the jail time, Ammons is now facing $250 in fines and court fees, according to the Huffington Post. WREG, the Memphis CBS station, reports sagging pants violate the school dress code. Deputy Charles Woods, the Bolivar Central High School resource officer, said he had reprimanded the students several times before the arrest.

The Huffington Post reports sagging pants have been banned in some communities, including Opa-Locka, Florida, and Wildwood, New Jersey. A city council member in Dadevill, Alabama, proposed that the city ban sagging pants earlier this year because “God would not go around with pants down,” according to the Huffington Post.