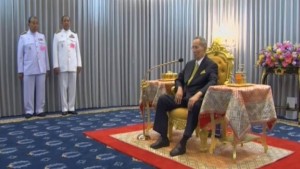 Thailand’s King Bhumibol Adulyadej has made a rare public appearance, amid concerns for his ailing health. In television footage released on Monday by the palace he is seen swearing in judges at a Bangkok hospital where he has been staying. He has received treatment for a number of ailments including a lung infection. BBC has more:

The health of the 88-year-old monarch is of public concern as he is widely revered and seen as an arbiter in the country’s divided political arena. The king, who is the world’s longest serving monarch, was last seen in September in a video released by the palace. He missed his birthday celebrations for the second consecutive year on 5 December. The event was marked by a cycling event last week in Bangkok led by his son, Crown Prince Maha Vajiralongkorn.

Palace officials did not give any further details of the king’s health on Monday. King Bhumibol has been in and out of hospitals for the past few years and has had operations to remove his gallbladder and to treat hydrocephalus – an excessive build-up of fluid on the brain. He was re-admitted to in June, shortly after he was discharged.

The king’s popularity stems partly from his long reign, but he is also seen as a pillar of stability in Thailand which has been wracked by political strife in recent years and is currently governed by a military-led government.