Tears flowed freely in Ketu area of Lagos on Saturday after a policeman, believed to be under the influence of cannabis killed three persons and himself. 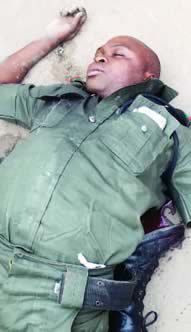 The officer, whose identity was given as Stephen James, committed the act around a popular hotel in the area.

It was gathered that among the deceased were twin brothers identified as Taiwo and Kehinde Oyesunle and their friend known simply as Jeje.

Sadly, the twins were the only children of their mother.

Eyewitnesses said trouble started when the police sergeant with Force number 217884, threatened to shoot customers if they failed to buy him alcoholic drink.

Officer James, who was said to be a habitual smoker of marijuana, however, felt offended after the victims – Taiwo, Kehinde and Jeje – advised him to comport himself as an adult and a responsible policeman.

Angered by their utterance, the policeman reportedly ambushed and killed the three young men, who were in their early 30s, as they stepped outside the hotel premises where they had gone to celebrate Jeje’s birthday. 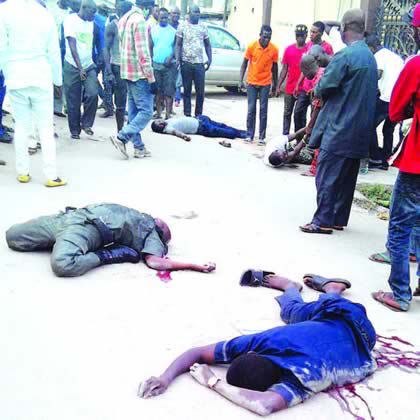 When the gravity of his act dawned on him, the policeman reportedly shot himself in the chest.

An eyewitness who gave his name as Segun said, “I was in the bar when the policeman first came in and threatened to shoot customers if they failed to buy him drinks. He boasted that he felt like killing someone today, but other customers and I pleaded with him.

“When the three guys walked in and sat, he went to them and threatened them too. But the guys told him to calm down that they would take care of him but he should comport himself as a responsible police officer.

“Nobody knew he took offence with their statement. The police officer shot the three guys one after the other as they stepped outside the hotel before killing himself. The whole thing happened like a movie,” he said.

The youths also wanted to burn the corpse of the officer, but policemen, who later got to the scene pleaded with them.

Policemen led by the Divisional Police Officer of the Ketu Police Station arrived at the scene at about 5.30 pm to carry the corpses away.

The Police Public Relations Officer, Mr. Joe Offor, confirmed the incident, said he had not yet received the full details of the incident.

DSP Joe Offor said, “The policeman was on duty at that hotel. He was attached to Mopol 22, Ikeja. He was drunk while on duty and he acted under the influence of alcohol.”