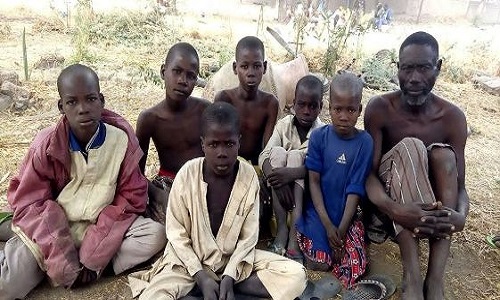 The Nigerian military on Thursday said troops acting on a tip off have rescued another 210 abducted women, elderly men and children held captive by Boko Haram in some Borno State villages.

According to a statement signed by Col. Sani Usman, Acting Director, Army Public Relations, “The abductees were rescued when troops responded to a tip off that Boko Haram terrorists’ had besieged Ejilije, Bulagaije-lari, Bulagaije-Adamde and Ajiri villages and holding the inhabitants captives.

“The terrorists fled the areas before the arrival of the soldiers. The team found and rescued 210 persons, comprising of mostly elderly men, women and children who have been safely evacuated to an Internally Displaced Persons camp.

“The rescued persons said that they were brought there by the terrorists from various villages to be used as human shield in case if advancing troops of the Nigerian Army came to attack the Boko Haram terrorists.

“The troops also recovered 1 Machine Gun barrel, 4 loaded magazines of G3 rifles, 4 Dane guns and some quantities of 7.62mm ammunitions, as well as empty canisters of Mortar bombs and a bandoleer.

“The gallant soldiers have continued their advance, raids and patrols to further deny the Boko Haram terrorists freedom of action”.