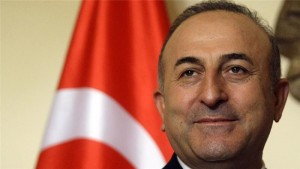 Turkey’s foreign minister said Ankara’s patience with Russia “has a limit” after Moscow’s “exaggerated” reaction to a weekend naval incident between the two countries, an Italian newspaper reported on Monday. A Russian warship fired warning shots at a Turkish vessel in the Aegean Sea on Sunday to avoid a collision and summoned the Turkish military attache in Moscow over the incident. Aljazeera has more:

“Ours was only a fishing boat. It seems to me that the reaction of the Russian naval ship was exaggerated,” Mevlut Cavusoglu told the Italian daily Corriere della Sera in an interview.

The incident is likely to heighten tensions between the two nations, which are at odds over Syria and Turkey’s downing of a Russian fighter jet last month. “Russia and Turkey certainly have to re-establish the relations of trust that we have always had, but our patience has a limit,” the Turkish foreign minister said.

Cavusoglu said Russia had already “put itself in a ridiculous position” with accusations by President Vladimir Putin that Turkey had shot down the jet to protect oil supplies from the Islamic State of Iraq and the Levant (ISIL). “No one believed it,” he said. He also criticised Russia’s military intervention in Syria, saying it was aimed at propping up the regime of President Bashar al-Assad, not combating ISIL.